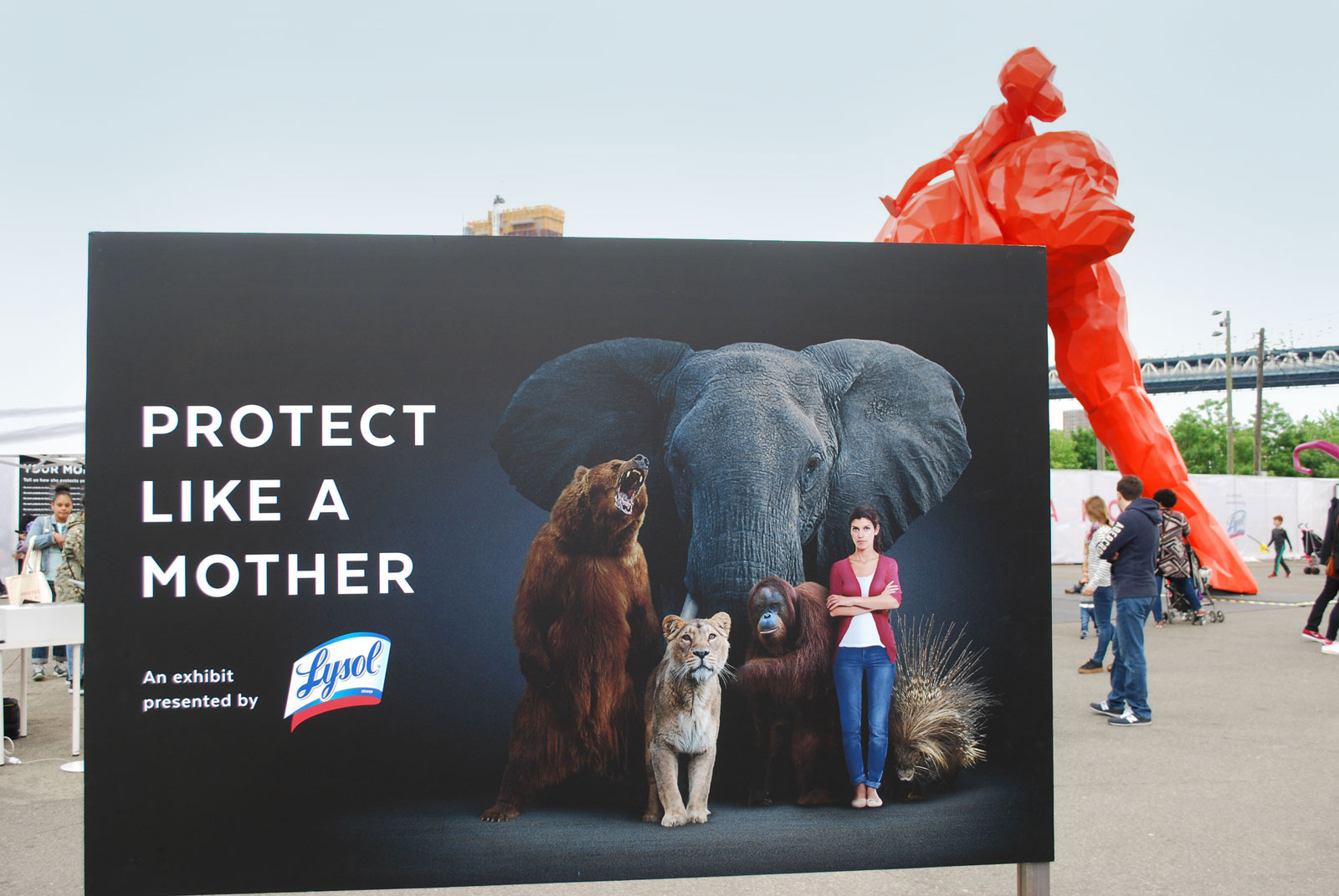 The “Protect Like A Mother” spots and print ads do not actually feature any of their products. They focus on mothers with their inner animals well represented.

Baby Makes 3 is dedicated to preparing expectant couples for their first child by helping them assemble their dream nurseries. Moving to the next phase of life, our sponsor Lysol® recently chose to honor motherhood with their campaign “Protect Like A Mother,” which makes a societal statement without emphasis on their products. It was a conscious and purposeful choice on the company's part.

Two versions of the “Protect” commercial have been collectively viewed over a million times on YouTube, and they feature humans represented as large animals unleashing their fierce parental side. A bear roars at a car in a crosswalk before it can hit her daughter; an elephant wards off boys teasing her son; and a lion curls up with her sleeping daughter on their couch.

At a presentation at 1 Hotel in Brooklyn Bridge Park on Thursday, May 18th, 2017, Rich Sidoli, Senior Brand Manager Healthcare, Brand Equity at Reckitt Benckiser, Lysol’s parent company, spoke to the press about the Lysol campaign, its objectives, and what it means to the company. As the team went down the “Protect Like A Mother” journey which started a year ago, they initially were concerned about keeping their brand current and relevant, but then they realized that what is most important is what is universal and stays the same.

“It was this idea of protection and how mothers protect that became very important to us and that we really resonated with,” he said. “It also had a place within the brand because it is what Lysol has been doing, in a smaller way than what Mom does, for 100 years in the realm of protecting families from germs so that they can be happy and healthy.”

In formulating their new campaign, Lysol landed on the idea of exploring how mothers protect which then lead them into thinking about and discovering that the concept was “not just universal to people, across cultures, across borders, but it's also universal across the animal kingdom,” said Sidoli. They discovered amazing stories of animal motherhood that they felt compelled to share with the public.

One of those stories that Sidoli cited was about the octopus which lays 100,000 eggs. One might think that her job would be done and that some would survive easily enough, but her procreative journey is actually just beginning at that point. “She spends the next 12 months, day in and day out without sleeping, blowing bubbles over these eggs so that they clean and aerate the eggs,” he said. After a year of this arduous task, little octopi are born. 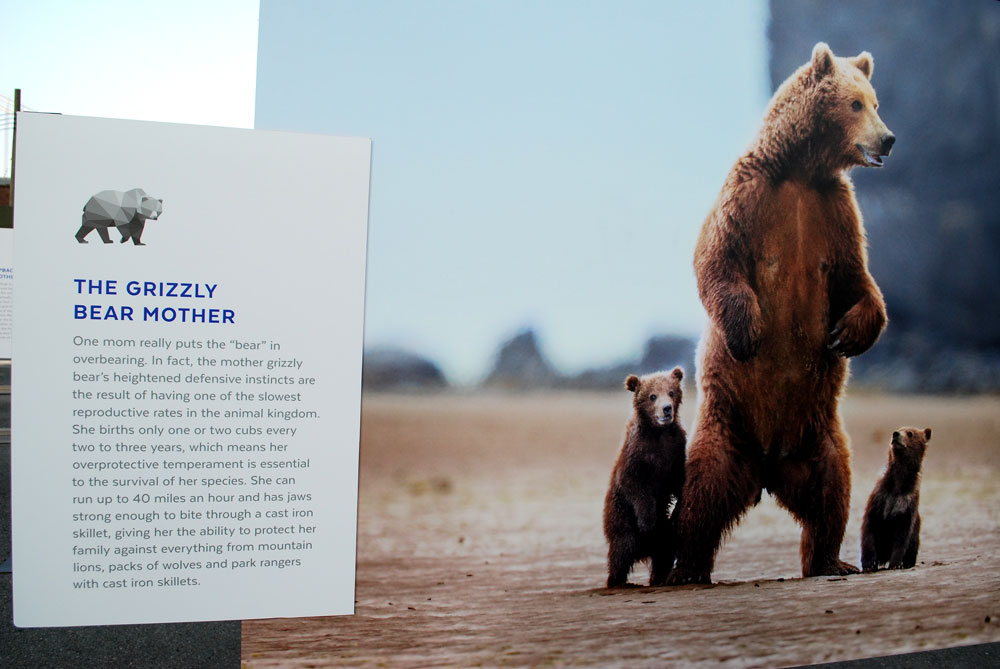 Bryan Reesman
Mama Grizzly births only one or two cubs every three years, giving her time to protect.

Another example he offered was the image of an orangutan with a baby on her back. It looks like a fun piggyback ride captured for a fleeting moment, but in reality it is part of an ongoing endeavor. An orangutan mother carries her child around on her back for the first six month of its life. “Whether she's foraging for food, swinging from trees, or running through the jungle, she's going to have the baby attached to her,” he explained. “She's got to be careful for that entire time to make sure she's protected from the dangers that are inside the jungle.”

We best know and understand the human mom, and as Sidoli noted, we have undoubtedly read stories of the woman who lifted up a three-ton car or the woman who fended off a 700-pound polar bear to save her child from danger. But mothers do plenty of other things every day on a smaller scale that are important. “It's the little things that she does to protect her child,” stressed Sidoli. “Whether it's from something imaginary like a monster living under the bed, or whether it's from something that is real but they can't see like germs where Lysol can play a role.” 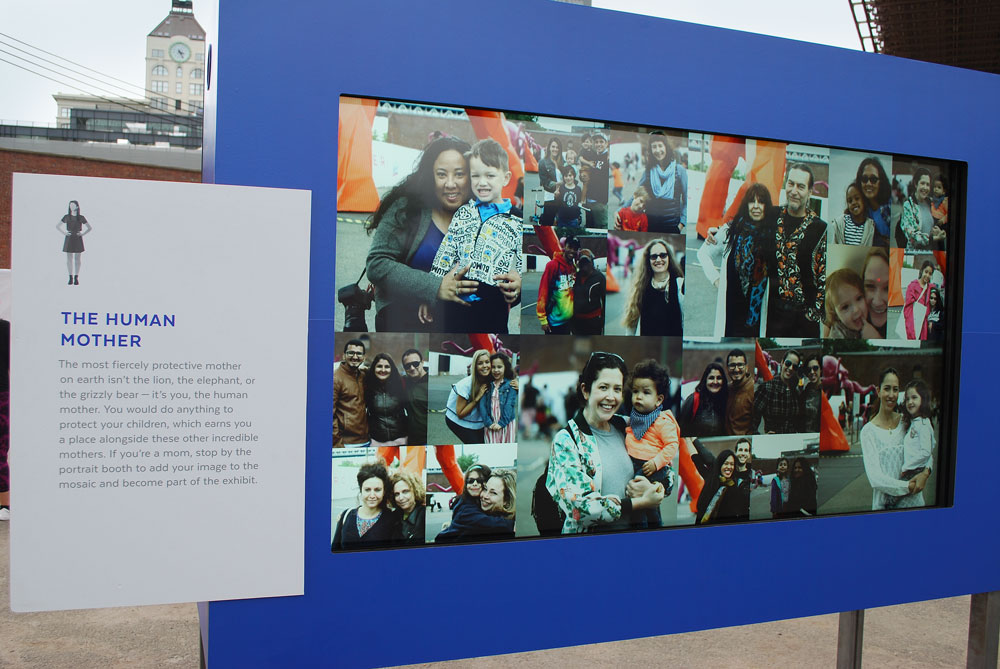 Sidoli enthused that an exciting aspect to the “Protect” campaign was the rare opportunity to give back to people. The way Lysol has done this is two-fold. The “Protect Like A Mother” spots and print ads do not actually feature any of their products. They focus on mothers with their inner animals well represented. Secondly, the company erected an animal sculpture park and exhibit beneath the Brooklyn Bridge that tied in with the campaign. It was on display to the public for the weekend of May 20 and 21.

Five distinct elements formed the exhibit. Located along one wall was the “Your Mom Is An Animal” chalkboard where children and adults could write about how their mothers protect and have protected them. (“My mother protects me like a _____ because she _____.”) Along the opposite wall sat a tent that featured free greeting cards that children could color and give to their mothers to show their appreciation, with numerous animals represented. (“You're my kangaroo.” “You're my grizzly bear.”) Filling the center section were 11 7’ high and 6’ wide displays spotlighting different animals (such as swans, sea lions, and poison dart frogs) and describing how they raise their young. Located at the end of those displays stood a digital photo board featuring pictures of human visitors who posed with their children. 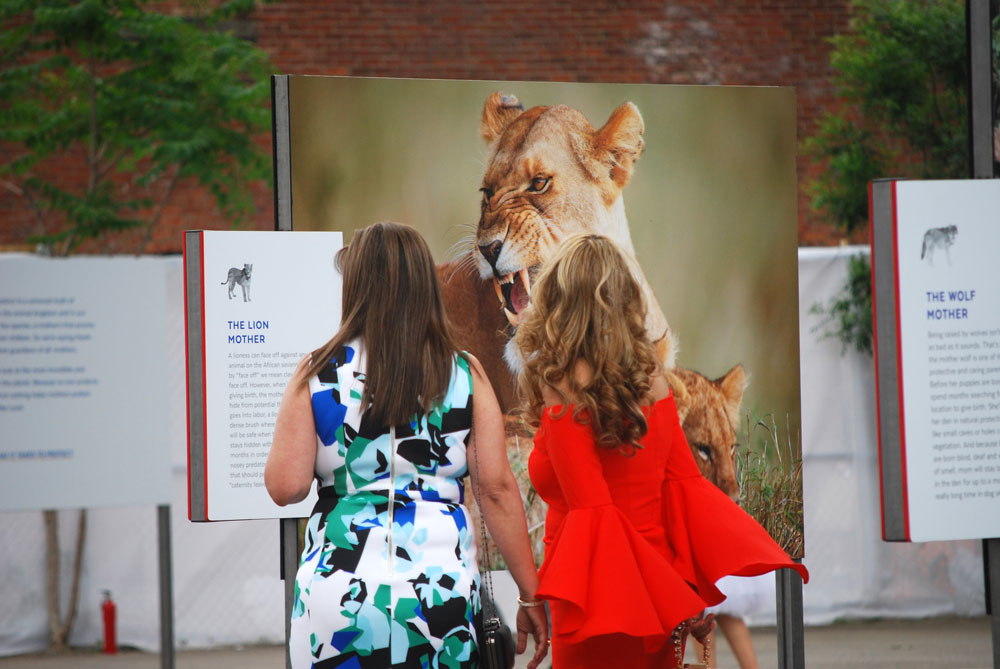 Bryan Reesman
Hear me roar. Lion moms hang out in tall grass to protect their young.

Three larger-than-life sculptures loomed large in and over the exhibit – a giant orange orangutan with a baby on its back, a purple octopus with outstretched tentacles (and bubble machines blowing below), and a golden eagle hovering above a nest with two eggs, one of which had cracked open (and children could play in). These drew the most attention as they stood out and offered fun photo ops. The bright, big orangutan was visible across the river from FDR Drive in Manhattan!

Children and adults alike flocked to the exhibit, which drew in an estimated 10,000 people over the 16 hours it was open that weekend. When Baby Makes 3 visited on Saturday afternoon, several hundred people journeyed inside through two opposite entrances—the pier and greenway area of Brooklyn Bridge Park and St. Ann's Warehouse, from which at least two wedding parties strolled through to absorb the animal stories, take photos, and intermingle with other families.

Often times more adults than children walked through, and the exhibit excited their inner child. “I wish I could stay here all day and climb the orangutan!” blurted out one thirtysomething woman.

After scrawling something on the chalkboard, a young lady joked, “People are going to wonder what five year-old wrote that.”

Many parents enjoyed playing with their kids around the eagle and the octopus. “They've got bubbles!” a young woman gleefully declared.

Many families eagerly participated in the digital billboard. The collage of happy images gradually morphed as more people had their pictures taken by a professional photographer. As Sidoli stated, Lysol wanted to honor the moms visiting the exhibit, so mothers and children had the opportunity to become a part of the interactive display.

“The exhibit is not a stunt,” stressed Sidoli. “We did it because we wanted to give back and wanted people to experience what we experienced [in creating this campaign]. The ad was very much done for the same reason. It's about putting moms first. In order to do that, we need to have faith that the brand can take a backseat. We need to do it right if we're going to do it.”

Bryan Reesman is a freelance journalist in New York City.